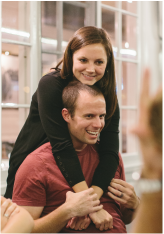 David Charbonnet
David  was born in San Diego, CA into a military family.  He spend most of his formative years in The Woodlands, Texas. David  joined the Navy in 2006 and  graduated training in 2010. David was then assigned to SEAL Team 1 where he served for a year and a half.

In October of 2011, David was injured in a parachuting accident outside of San Diego. He sustained a burst fracture of the L1 leaving him paralyzed from the waist down.  David began rehab at VIP just months after his injury and continues to this day.  When Dr. Marcus , Founder of VIP, presented David with the opportunity to serve as VIP’s President, he gladly accepted the opportunity to help others in the same way VIP had helped him.   David currently leads VIP as President and serves on the Board of Directors.

David’s wife, Janet, joined the VIP team as well and serves at VIP's Administrator and Secretary of the non-profit.  Janet grew up in The Woodlands, Texas and graduated from Texas A&M University with a Bachelors degree in Marketing, and with a certificate in International Finance.  She moved to San Diego in 2010 and spent several years working in property management.   She loves being able to assist at VIP and has seen what an encouragement and support it has been to David’s recovery.

They enjoy spending time outdoors and soaking up the beautiful spots of San Diego. Their favorite thing is to spend time with their families and their two dogs, Rooster and Jake. Dr. Marcus did his residency training at the University of Medicine & Dentistry New Jersey and the prestigious Kessler Institute of Rehabilitation. He gained invaluable experience there with a focus on spinal cord injury, brain injury and sports medicine. He has been in San Diego for the past 8 years with a diversified practice that has included inpatient rehabilitation, outpatient sports medicine, pain management and physiatry (physical medicine and rehabilitation). He also successfully completed UCLA's Helms Acupuncture course for treating pain.

After extensive research, Dr. Marcus has created one of the most modern facilities in the world for motor and gait training. The opening of Medical Rehabilitation & Kinematics Lab, Inc. and its transformation into the non-profit VIP NeuroRehabilitation Center is a vision of his to provide state of the art care with sound medical reasoning and unlimited creativity.

Dr. Marcus has found that amazing results can be obtained when an environment is created whereby communication, learning, creativity, awareness, consistency, passion and intelligence is applied.  Research is finally beginning to show that with the right environment, patients who once were thought by the medical and scientific community to be stagnant in their improvement can now be helped. 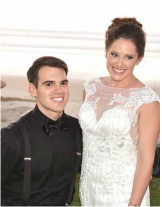 Dana Moore
Dana Moore was born in San Diego and attended Rancho Bernardo High School. He then went to Mercyhurst University in Erie, PA after receiving an athletic scholarship to play NCAA division II lacrosse from 2008-2011. In his senior year in 2011, they went on to win the program's first national championship. He graduated with a degree in International Business.  In November 2013, Dana was injured in a water well drilling accident in San Diego that fractured his thoracic 6-7 vertebrae leaving him paralyzed from the chest down. Before leaving the hospital, he already had VIP NeuroRehabilitation in his sights and began attending shortly after discharge and is still currently an active patient.

In early 2016, VIP's president, David, approached Dana and presented him with the opportunity to become a board member and he graciously accepted. Dana is excited to join the board and help share his story and how valuable and beneficial VIP is to his life. He hopes to give others the same opportunity VIP gave him. 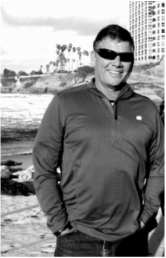 Conrad Kress, Commander, USN, MSC
Commander Kress completed SEAL training with Class 98 in August of 1978 and has served in the US Navy for his entire career.  He has served in multiple operational tours and various platoons.  To mention only a few, Conrad has provided medical liaison for the Presidential Emergency Operations Center while assigned to the White House Medical Unit and served as Medical Department Head for SEAL Delivery Vehicle Team ONE and Naval Special Warfare Group 3, Logistics Support Unit 3.  He is presently serving as the Deputy Surgeon for Special Operations Command Pacific.

Conrad has known David Charbonnet, President of VIP NeuroRehabilitation Center, since he was born so when he broke his back it hit close to home. He spent a great deal of time with David during the months after his accident and saw firsthand how VIP could change someone’s life for the better. So when David asked for Conrad to join VIP's Board of Directors he gladly volunteered.

Conrad enjoys all that the beaches of Oahu have to offer. But nothing brings more joy to his heart than spending time with his two daughters and his wonderful grandsons 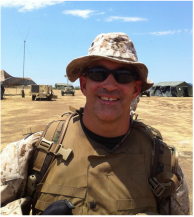 Stephen W. Burgher, MD, FACEP
Dr. Stephen Burgher graduated from Southern Methodist University in Dallas, followed by the University of Texas Medical School in Houston.   Upon graduating medical school, he went on to serve as a flight surgeon in Corpus Christi, Texas.

Dr. Burgher then attended post-graduate residency training in emergency medicine at the Naval Medical Center in Portsmouth, Virginia. He was selected Chief Resident in his third year of training. He was awarded the Council of Emergency Medicine Residency Directors (CORD) 1998 Resident Academic Achievement Award and received additional awards for his research, presentations and publications in emergency medicine.

Dr. Burgher left active duty after serving more than 10 years in the US Navy. He entered private practice emergency medicine in The Woodlands, Texas. He then moved to Dallas with his family to practice at Baylor University Medical Center, where he has practiced since. He entered the Navy Reserves in 2010, receiving a commission as a Commander, and an assignment with the US Marine Corps as a Battalion Surgeon. He deployed to the NATO Role 3 Multinational Medical Unit on Kandahar Air Field in support of Operation Enduring Freedom (OEF), where he served as the department head of Trauma/Emergency Medicine. Commander Burgher’s military personal awards include: Meritorious Service Medal, Navy and Marine Corps Commendation Medals (3), and Navy Achievement Medal.

He has been a family friend of the Charbonnet’s for many years. He has been a great encouragement to David since his accident and was a natural choice to join the VIP Board of Directors. VIP benefits greatly from his experiences both military and civilian.

Dr. Burgher is a native of Dallas, Texas where he lives with his wife of 27 years and three children. He especially enjoys spending time with family and is active in his local church. He enjoys hunting, fishing and camping. He also enjoys personal fitness, including triathlon training and CrossFit.